From Personal Science Wiki
Jump to navigation Jump to search

The Oura Ring is a wearable that is worn on a finger as a ring which tracks sleep, activity and readiness. Since 2013 there have been three different versions of the ring, with the latest version (v3) being launched in November 2021. At the same time they changed their business model, requiring a monthly subscription for access to all metrics recorded.

While the sensor set of the rings have changed over the versions, generally they contain an accelerometer, a temperature sensor as well as an optical heart rate sensor. From these sensors the Oura calculates the following metrics: 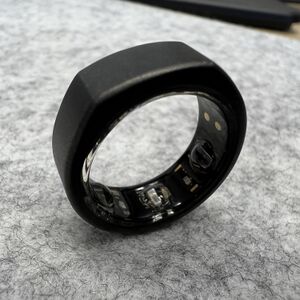 A generation 3 Oura Ring, showing some of the sensors on the inside of the ring

Oura does not report the absolute temperature recordings (neither through the phone app, nor through API data exports). Instead it provides two ways of reporting relative changes.

The trend view of the body temperature is a bit more complicated. Oura states that "the trend view displays a weighted average of how your body temperature varies from your baseline based on a three-day window" and that "days closed to the current date will have more of an impact on your readings"[4]. Oura does not disclose the details of how the weighting of records is done and as such it is not possible to really understand or recreate how the company arrives at these values. One observation is that the trend values tend to be slightly biased towards positive values, probably as the distribution of possible body temperatures is not fully normally distributed, but rather censored on the lower end[5].

The rings of the 3rd generation include an Oura internal beta-test for cycle tracking. Furthermore, since mid-2022 the Natural Cycles app – a cycle tracking app that's cleared for use as birth control – can use the temperature data from the ring as main input to predict fertile time windows[6].

As for most wearables, there is unfortunately no (easy) way to access all raw data from the device. But Oura offers a way to download at least all of your calculated metrics from the Oura Cloud web interface. Beyond this, they also offer an API to automate access to Oura data in third party tools. An example implementation is the Oura integration into Open Humans, which automatically fetches the latest data at multiple times throughout the day and which since December 2022 gets data both from version 1.0 and 2.0 of the Oura API.

In January 2022, Oura announced a version 2.0 of their API for exporting data[7]. While it was under development this new API only provides access to more detailed activity data (such as intra-day heart rate), but as of December 2022 detailed information about readiness and sleep are also available[8]. For now the version 1.0 of the API still works and is scheduled to be sunset at some unspecified time in early 2023[9].

Given the different kinds of sensors used in the Oura Ring, a diverse set of projects have been done with it:

(The content in the table below is automatically created. See Template:Tool Queries for details. If newly linked pages do not appear here, click on "More" and "Refresh".)